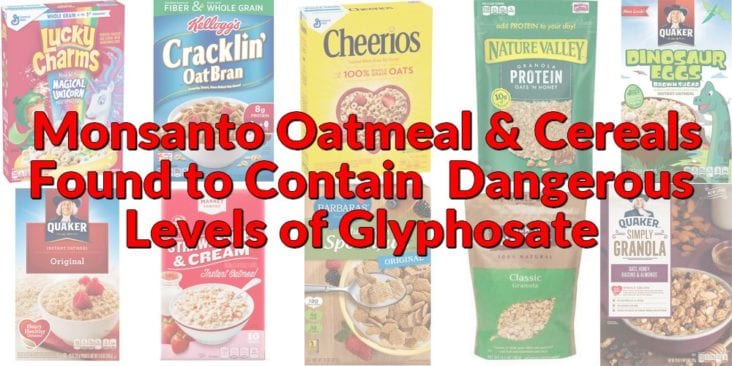 Glyphosate, the weed-killing poison in Monsato’s Roundup, has been linked to cancer by California state scientists and the World Health Organization.  It was found in all but two of 45 (non-organic) oat-based foods that were tested.

The World Health Organization has determined that glyphosate is “probably carcnogenic to humans” and the Environmental Protection Agency (EPA) has set a safety level for the potentially dangerous chemical, however Monsato “strongly disputes the findings.”

Glyphosate is the most commonly used herbicide in our country. Studies suggest that glyphosate-sprayed crops such as wheat and oats are a major contributor to glyphosate in the daily diet.

Do you have any of these in your pantry?  Are you going to switch the brands or foods you bring to the breakfast table?

*EWG’s child-protective health benchmark for daily exposure to glyphosate in food is 160 ppb.

**** Lucky Charms Frosted Toasted Oat Cereal with Marshmallows. Marshmallows were manually removed from the samples prior to shipping to the lab and testing for glyphosate.