Home / Oakland County / Lake Orion / It’s Candida, not Canada! Yeast Overgrowth is Something YOU Need to Know About

It’s Candida, not Canada! Yeast Overgrowth is Something YOU Need to Know About

It’s something a lot of people probably have never heard of, let alone know how harmful it can be to the body – Candida. While it sounds our neighbor to the north, Candida is a common problem that needs waaaaaaaaay more awareness.

Candida, which can be spread sexually and via common living spaces, is a genus of yeasts that is the most common cause of fungal infections around the world. It is typically found in small amounts in the mouth and intestines on the skin, according to Healthline.com.

Signs of candida include:

The most common health issue affecting women today is candidiasis, or yeast overgrowth. It can impact the stomach, thyroid and female reproductive organ issues, which can lead to surgical intervention. Factors that can cause it overgrowth include:

Candida feeds on processed sugar, but when that isn’t present in the body it will feed on B6 and folate, which are two key nutrients required for hormonal regularity. When women aren’t careful with their diet they can unknowingly feed it.

The best way is through eating right and consuming the proper nutrients to prevent growth of Candida. Carbs, high-lactose dairy products and refined sugars can lead to growth of Candida. These foods have been shown to combat Candida infections:

The recommended holistic protocol for a candida purge is a sugar flush to get rid of its food source, then an anti-fungal oral blend, soil-based probiotic, structured silver liquid and gel and an essential oil roller blend.

If women have MTHFR genetic mutations or defects that can make the detox process a bit more complicated. This means the body won’t detox properly on its own, so you have to manually force it with detox activities like ionic foot baths or infrared sauna sessions.

Candida is invasive and spreads easily, according to a recent New York Times article. It can go between couples. Mothers can pass it on during the gestation period, so children can be born with it. More importantly, the NYT article notes, Candida is “so tenacious” due to its resistance to many drugs used to treat it, such as the commonly prescribed Flagyl®.

If dietary changes don’t work and neither does mainstream medications, holistic antifungal supplements and therapies are another option. Candida might not be life-threatening, but it can affect vital organs and reduce one’s quality of life if not treated properly.

For Julie Park Brown, a candida overgrowth client at my spa, no matter how hard she tried or where she went to get answers for her stomach bloat, she wasn’t finding resolution.

A live blood analysis revealed that she had clumping of red blood cells (this means she wasn’t digesting protein), red crystals (a sign of bowel toxicity or leaky gut), uric acid crystals (the cause of her inflammation) and sugar bacteria and yeast, which caused her bloat. She completed her 35-Day Mini-Cleanse Detox and now her stomach is out of distress.

“I was in pain around my mid-section–a lot,” she says. “Within the first two weeks I felt almost immediately less bloated…Now, there is no bloat.” 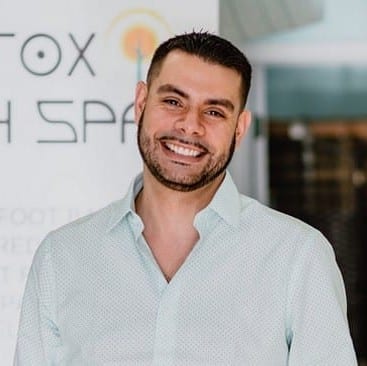 With our 35-Day Detoxes, flush your body. Reset & rebuild your immunity. Retain & sustain results. Most important: become your own health expert.