Today I would like to introduce everyone to the Troy Historical Village, located in Troy, Michigan at the corner of Wattles Road and Livernois Road. I don’t know how many times I’ve driven by that corner and I’ve never noticed this gem of a museum. This village contains 10 buildings that give a glimpse into this region’s past. The first building one might encounter is the log cabin, which was built in 1840 with hand-hewn logs and bark-covered ceiling beams. The inside gives visitors a glimpse of what it was like to live in the 1800s and how much work it was to survive. While we might enjoy the ambiance and luxury of a fireplace in our living rooms, these pioneers had one as a necessity since the fireplace was all they had for light, heat and to cook meals. This idea is driven home by allowing visitors to take part in some of the daily chores that families did every day – collecting firewood, churning butter, collecting water, and beating out the rugs to name a few.

Another building of note is the Poppleton School, which was built in 1877 near the northwest corner of Big Beaver and Crooks Road. Inside, visitors are able to see what it was like to attend a one-room school in the 1800s by being able to sit in the desks and peruse old schoolbooks. After sitting through a 30 minute demonstration on what a school day might resemble, I have to say that if you ever have a child who says they hate school and it’s so unfair, take them to the Troy Historical Village and have them sit through the presentation. They’ll get a feel for how different it was back in the 1800s and how good they really have it now. *grin* 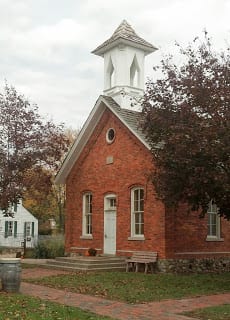 These are just two of the buildings I was able to spend time in during my visit to the Troy Historical Village, but there are still quite a few more people are allowed to go into. Those buildings include:

The Troy Historical Village can be comparable to Greenfield Village as far as historical significance is concerned (especially to our area); but it is quite a bit different in size and can easily be done in an afternoon, whereas it can be hard to see everything at Greenfield Village in a day.