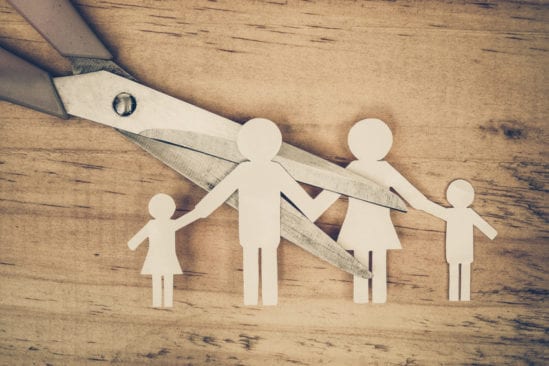 It’s no secret that today’s kids use their phones more than any other generation before. Whether it’s texting, using social media, or contributing to the four billion searches Google gets daily, kids are almost always on their phones. And while there are concerns with phone and Internet use among kids, a new study has found that texting and social media may be key to keeping children connected to their divorced parents.

With between 40 and 50% of marriages ending in divorce in the U.S., there are a lot of kids who have to manage seeing just one parent at a time. And this Kansas State University study shows that utilizing technology can help parents and their kids stay in contact when they’re not living together.

Study co-author Mindy Markham, an associate professor at KSU, and her colleagues looked at data from almost 400 divorced mothers and fathers who had kids between the ages of 10 and 18. The data showed three different types of co-parenting styles — conflicted, moderately engaged, and cooperative. Other factors that were considered included parental knowledge of the child, warmth and closeness from the parent, and inconsistent discipline.

Surprisingly, the researchers found that the co-parenting styles didn’t make as big of a difference as one may think. However, the frequency of communicated had a major impact.

When parents talked or messaged with their child once a month or less, the researchers found them to have less knowledge about their child. But the more contact children had with their parents, the stronger the relationship was.

Markham explained, “Preteens and teenagers probably have their own devices and are able to text, email or video chat with their nonresidential parent so the child can take more ownership of the relationship. I think frequent communication, whether it is in person or using communication technology, is really critical to making sure that the parent-child contact stays in place.”

According to psychologist Judy Malinowski, who was not involved with the study, “For young people, texting, Facebook, Snapchat, Instagram — those are their preferred form of communication. What matters is the connection. Adults might not see something like texting as connecting, but kids view it as high-value connection.”

Unfortunately, children with divorced parents don’t always get to see both of their parents as often as they’d like. In fact, when children don’t live with their fathers, only 22% of fathers see their children more often than once a week.

When a child has their own way of communicating with the parent they aren’t with, they eliminate the risk of getting stuck in the middle of an argument between their parents — which is common when divorced couples do not have a cooperative relationship. With a divorce costing, on average, between $15,000 and $42,500, financial stress can further hurt an already fraught relationship. Additionally, parents don’t have to hesitate to call because they don’t have to go through their ex-spouse in order to talk to their child. This is beneficial for both the child and the parent.

So while parents often have concerns regarding how frequently their child is using their phone, in situations like divorce, texting and social media can play an integral, positive role in keeping children connected to their parents.