Home / My Baby Turned 2! The Highs and Lows of a Sports Themed Pinterest Party…

My Baby Turned 2! The Highs and Lows of a Sports Themed Pinterest Party…

Who knew?  I certainly did not know that kid birthday parties were such a big deal until my sons’ 1st and 2nd birthdays.  And now with the added pressure of living up to all of the adorable Pinterest ideas, the bar has been set super high!

My husband and I have been remodeling the basement after the flood in August that ruined our newly finished basement.  We received about 30 inches of water that devastated our living conditions for quite some time.  More on that later.  Needless to say, our party planning time was limited due to the remodel.  I wanted to make a birthday theme that was “easy” (haha!).  Our son is a huge sports fan like his father.  He is always kicking, throwing, shooting balls all over the place.  One day we saw him shuffling around the floor and realized he was playing basketball.  Last night, he went to bed with a baseball in his hand and woke up the next morning with it still in the same hand.  So, naturally, I thought a sports theme was the way to go.  I thought it would be easy because it seemed like a popular enough theme so that party-ware would be easy to find.

I wish I had gotten better pictures of the event and all of the crafts that I did ahead of time.  I didn’t even get a picture of the concession table with the hot dog and nacho bars.  It felt like I didn’t get to take a breath before and during the party.

The Invite:  I made the invite in Microsoft Word and really went with a sporting event theme.

The Concessions:  The sports stadium theme continued with a nacho bar and a hot dog bar.  I totally messed up by not getting pictures of this.  We used lots of crockpots/warmers for nacho cheese, chili, refried beans, hot dogs, etc.

Snacks/Cake:  We made my mother-in-laws almond sugar cookies and my friends helped to decorate them.  We used sharpies to draw on the clementines to make them look like basketballs.  I got the Chicago mix popcorn from Costco that has an amazing mixture of caramel and cheese popcorn.  My mother-in-law made chocolate covered strawberries into footballs.  I bought a double layer chocolate cake from Costco and decorated it with Reeses Pieces to look like a basketball. 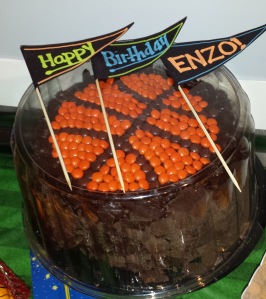 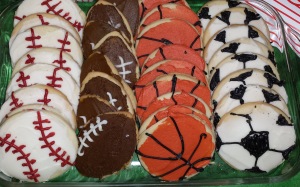 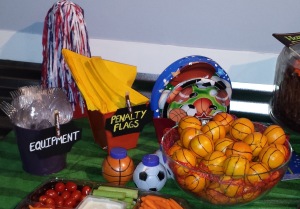 The Uniform:  Enzo’s shirt came from Etsy for $23. It’s a “baseball” shirt and I put the number two on it with our last name.

The Games:  I made 2 piñatas;  a baseball to hit and a soccer ball to kick.  I’ve never done a Papier Mache project before so this was a learning experience; very time-consuming as it takes several days of letting it dry and adding another coat of paper.  I used a punch balloons to get the nice big round shape.  I used a thick combination of Elmer’s glue and water to stick shreds of newspaper to the balloons.  I popped the balloons and removed them.  I filled the piñata’s with 100 small toys (not candy) I found on amazon for about $15.  I used white Cray paper as my outer white coat and just put a small ribbon of Elmer’s glue on the back and stuck it to the ball.  Then I used cut-out pieces of colored construction paper to put the “threads” on the baseball and the pentagons on the soccer ball.
In addition to the piñatas, we played “pin the football in the goal post” and throw the football through the goal.  I brought Enzo’s basketball hoop down to the basement to play with. 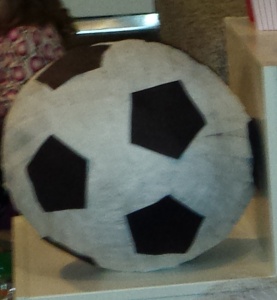 The Décor:  My best friend has made both of Enzo’s birthday banners with her Cricket dye cut machine.  Then I use black and white Cray paper to get like a referee effect.  I found some cheap decorations/table cloths on Amazon.  And I got some sports themed balloons from the local dollar store.  I made extra little touches by putting signs on things like “Equipment” for the utensils and “Penalty Flags” with the yellow paper napkins.  I painted some wooden clothespins brown with white laces to resemble footballs to hold the signs on the containers I got from the dollar store. I bought sports water bottles for the little tykes at the dollar store so that they wouldn’t spill their drinks.   Enzo also had some other sports related décor:  like his football beanbag and a basketball piggy bank that set out. 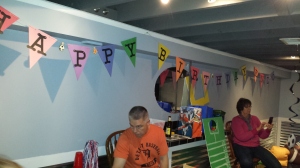 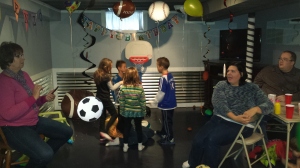 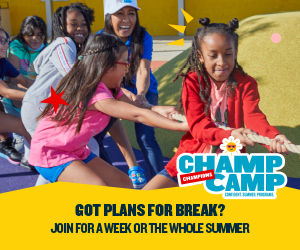