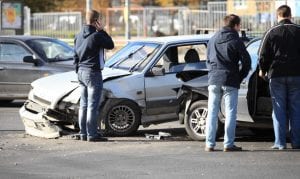 “Overprotective mom” is a loaded term. We’ve learned so much about parenting and safety in recent decades, and there’s nothing wrong with putting this knowledge into practice. Case in point: a Tennessee mom is being commended for her commitment to the safety of her child, after a text message she sent may have saved the baby’s life during a car crash.

As regular readers of this site know, car seat safety is essential in our modern world.

On her first day back after her maternity leave ended, Rebecca Tafaro Boyer told her husband that she wanted hourly updates on how their three-month-old baby, William, was doing without mom around. The new mom and nurse received said updates via text from husband David like clockwork. But after one message containing a picture of William in his car seat, Boyer’s motherly instincts went into overdrive.

Each day, Americans spend around 87 minutes in their cars. We wear seat belts to provide the protection we need in the event of an accident. There are incorrect ways to wear your seat belt, of course, but most passengers and drivers understand the correct way to fasten them. But infants who travel in car seats aren’t able to make those adjustments themselves — and many new parents don’t totally understand the proper positioning that will safeguard their baby in case the worst should happen.

That’s what Boyer focused on after she received that text message. She replied to her husband that the chest clip wasn’t high or tight enough on William to provide the proper protection. The top of the clip should be level with the armpits and the straps need to be tightened so the pass the pinch test.

Boyer told PEOPLE: “When I actually looked at the picture he sent, I realized that the car seat really wasn’t safely secured. just sent him a quick text and said, ‘Hey, fix the car seat,’ basically. And he did it — luckily.”

Luckily, indeed. Just 15 minutes after sending that text, David and William were involved in a collision. Less than three miles from the family’s home, another motorist suddenly pulled into traffic to turn left, not allowing David enough time to stop. He was forced to slam on the brakes while driving at 50 miles per hour and ended up crashing into the front passenger side door of the SUV that was turning. Although the car was totaled, David survived with fairly minor injuries — and, miraculously, baby William didn’t even stir.

Boyer recounted on social media: “My precious little bundle of joy was so well restrained in his car seat THAT HE DIDN’T EVEN WAKE UP. Even with the impact of the two cars, William only received a minor jolt — so insignificant that he was able to continue on with his nap, and then spend the next two hours flirting with nurses in the Le Bonheur ED.”

Although there are nearly 6 million car accidents in the U.S. each year, the outcome of this crash could have been much different if her husband hadn’t seen her reply or taken the time to fix the car seat positioning. Boyer took to Facebook to share her story to promote awareness and potentially save lives. She adds that all infants should be secured in rear-facing car seats until they reach the age of two.  Safe Kids Worldwide recommends that children remain rear-facing until they meet the height or weight requirements of their convertible car seat.

Boyer’s also proud of her vigilance, as it’s probably what saved the lives of her husband and child. There seems very little doubt that mother does, indeed, know best.