At a spot where Detroit’s home baseball team once played now stands the first units of a modular mix-use property known as The Corner. 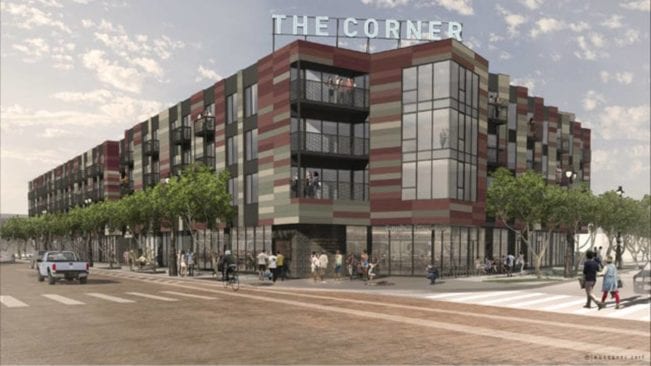 At the intersection of Trumbull and Michigan Avenue, the modular apartments are starting to take shape. The U.S. construction and real estate market has been getting stronger in recent years. In 2016, the construction market alone was worth more than $1,162 billion, and now this building boom has come to Detroit — The Corner will cost approximately $30 million to build.  The project was specifically cited by Curbed Detroit as part of the city’s growing real estate boom.

One reason The Corner is getting so much attention? The method of construction is a money saver. Due to their modular pre-fabrication, the units will offer increased soundproofing and a much shorter project timeline. In addition, modular constructions reduce energy consumption during the building process by around 67% and will actually reduce energy costs for tenants later on. When finished, the complex will have studio, one-bedroom, and two-bedroom apartments for rent, ranging in size from 650 to 1,200 square feet. Most will come with a steep price tag — starting at $1,100 a month — but around 20% will be earmarked as affordable housing options for those who make 80% or less than the median income for Detroit residents.

Developers report that six to 12 modular units will be installed each day, making it possible to install all four floors of apartments within only a month’s time. All told, the new property will offer 111 new apartments, which is tentatively good news for the 33% of renters who move every year and struggle to find affordable urban apartments. When the development is completed, which is expected to be by February 2019, it will also house retail shops spanning 26,000-square-feet of commercial space. Approximately 60% of that retail space will be leased at half the current market rate in order to appeal to small businesses based in Detroit.

Eric Larson, president and CEO of Larson Realty Group, noted in a statement how modular construction has had a significant impact on the project’s timeline.

“I really do believe in this technology,” Larson said. “I think it’s a process we can build on here in this city. It’s a process that has been used in a lot of other cities, especially in European cities. It’s an opportunity to build the base while the upper floors are being built at the same time… What would normally be a 16- to 18-month construction window we’re now at 8 to 10 months. It cuts the time in half and allows us to create a quality product but in a short period of time.”

Officials and partners note that The Corner project aims to support Detroit’s efforts to offer accessible and affordable options for local residents and local businesses.

David Reed, vice president of Champion Modular (the company in charge of building the units off-site), expressed in a statement: “Champion Modular is thrilled to be part of a team bringing new living space to a site with such a storied legacy. We’re excited to share our innovative way of building with residents of The Corner and contribute to the cityscape of the great city of Detroit.”