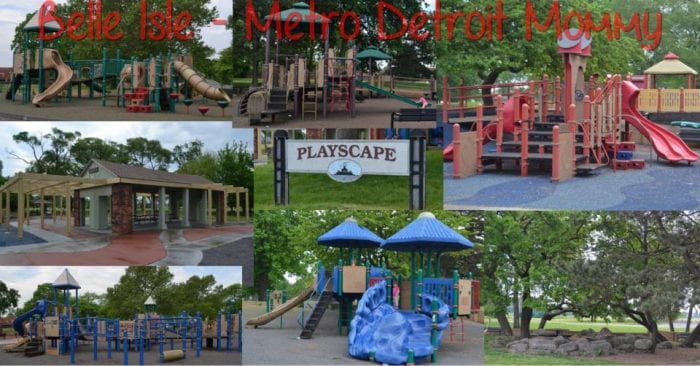 The Belle Isle Playgrounds are a great place for the kids to burn off some extra energy. There are a couple of different playground locations in the park. The Kids Row Playground as well as the new Belle Isle ADA Playground.  The Detroit River surrounds Belle Isle Park, a 982-acre island park in Detroit. As a result, the island provides spectacular views of Detroit to the North and Canada to the south.

Kids Row Playground is impressive with a one-half acre of play space in the center of Belle Isle. The park is located on Central Avenue and includes swings, tunnels, slides as well as other play equipment. There is also a picnic pavilion.  Much of the equipment is accessible to children of all abilities.

The actual play structure is amazing with so much to do and so much space for the children to play. However, there was a lot of garbage on the ground, even though there are garbage cans throughout the area.

Restrooms are nearby, about 500 feet away on Riverbank Drive. Additionally, Belle Isle Bites, and the Giant Slide are also within a few feet of the Kids Row Playground.

At the present time, park admission is free with the purchase of the Recreation Passport ($11 via the Secretary of State or $16 at a State Park)
Non-Resident Annual Pass $33
Non-Resident Daily Pass $9

Belle Isle is also host to: