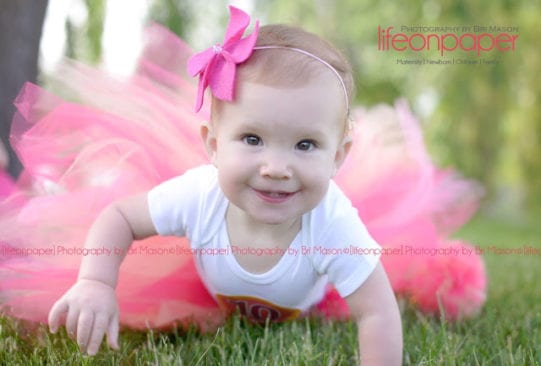 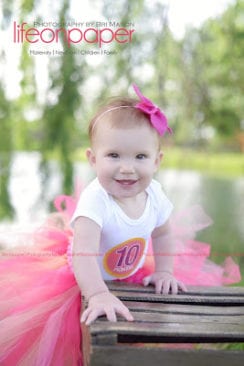 Yet another month has flown by and my little one is two months away from her first birthday, while Rosa is less than one month from being four.

Carlyn has two teeth on the bottom and two more peeking through on the top.  She’s been a little more fussy with the teeth coming in affecting her sleep at night.  Carlyn is standing up on her own for a couple of seconds at a time and has taken a step or two on her own.

She loves to play peek-a-boo.  She initiates the play on her own and giggles wildly.  Carlyn and her sister get along so well, especially when her sister isn’t bossing her around;)  They can often be heard giggling at each other.

Carlyn loves her sister’s princess tent.  We just got it out a month ago and she just loves to crawl and sit in there.  Although we have been working on signing with her, she just looks at us with a question on her face, then tries to say the word we are signing.

A big THANK YOU to our Metro Detroit vendors who donated their time and products to our 10 month photo shoot:

Photography by Life on Paper with Bri Mason – [lifeonpaper] Photography by Bri Mason is an on-location natural light Portrait Photographer serving Metro Detroit. Her mission is to treat her clients how she would like to be treated. She offers a quality service at an affordable price.
http://www.lifeonpaperphoto.com

Belly Banter from Golden Touch Concierge – Golden Touch is able to do almost any task that expecting parents and families may need when it comes to preparing for a new baby. A baby concierge is hired by expectant parents to take care of all the details when it comes to preparing for a new baby. Not only will a baby concierge cater to the needs of expectant parents, but they will also help with those toddler years. They also have a store front in Birmingham with great mom to be gift ideas, like Belly Banter, Noz Eez nose wipes and cookies for nursing mothers. http://www.goldentouchbabyconcierge.com